During their recent project for the DTC Visitor Program, Michael Iacono and John Henderson of Atmospheric and Environmental Research (AER) used the Hurricane Weather Research and Forecasting model (HWRF) to investigate an improved way to represent the sub-grid variability and vertical overlap of partial cloudiness within the calculation of atmospheric radiative transfer. Their exponential-random (ER) cloud overlap advancement was adopted by NOAA in the 2020 operational HWRF.

Clouds are a critical component of Earth’s climate in that they strongly affect both the incoming solar (or shortwave) energy, which fuels the climate system, and the thermal (or longwave) energy that is emitted by the surface and partially escapes to space after being transmitted, absorbed, and reemitted by the atmosphere. Understanding the way that clouds absorb, emit, and scatter radiation is essential to modeling their role in Earth’s radiative processes.

One limitation to simulating clouds and their radiative impact accurately is the challenge of representing their variability on scales smaller than the typical grid spacing of dynamical atmospheric models such as HWRF and the NOAA Unified Forecast System (UFS). Radiative transfer through sub-grid scale clouds strongly depends on whether the clouds are vertically correlated, such as in tall thunderstorm clouds, or uncorrelated such as for randomly oriented, shallow cumulus under high thin cirrus. This radiative process is also strongly dependent on properly simulating cloud fraction and cloud physical and optical properties.

Using the RRTMG radiation code in HWRF, the primary objective of this project was to establish the relative benefits of using the exponential (EXP) cloud overlap assumption, which became operational in HWRF in 2018, and the ER method. Both approaches have been shown to be more realistic relative to radar measurements within vertically deep clouds compared to the older maximum-random (MR) method. The MR approach forces the clouds to be more vertically coherent throughout adjacent partly cloudy layers, while the EXP and ER methods relax this restriction by allowing the correlation to transition exponentially from maximum to random with vertical distance through the cloudy layers with small adjustment possible via a decorrelation length parameter. ER adds a further degree of randomization between cloudy layers separated by clear sky relative to EXP. The exponential treatments have the effect of increasing total cloudiness and reducing shortwave radiation reaching the surface relative to MR overlap.

H220 forecast tracks over the first 60 hours with storm positions plotted every 12 hours for four predictions of Hurricane Joaquin initialized at 0000 UTC on 1 October 2015 for a set of four variations of ER cloud overlap. Best track observed positions of Joaquin are shown in black.

To assess this advancement in HWRF, hurricane simulations were completed with the assistance of the DTC and NOAA/EMC for multiple tropical cyclones using EXP or ER cloud fraction overlap and two methods for specifying the decorrelation length. Hurricane Joaquin, a 2015 Atlantic basin storm with an unusual track that was challenging to predict, was especially sensitive to the cloud overlap configuration as seen in the first figure, which shows the forecast track using four variations of the new cloud overlap methods. Statistics for a broader set of six Atlantic hurricanes, including the relative change in wind speed bias errors and in 34-knot wind radius errors seen in the second figure, suggest improvement using ER relative to the EXP cloud overlap method.

Our interactions with the DTC have been a rewarding opportunity not only to acquire new insights on this research topic, but also to transition critical physics enhancements to NOAA operations, and we will continue to pursue further research collaborations with the DTC and NOAA/EMC in the future. 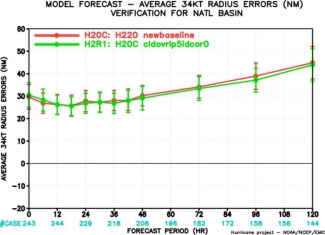 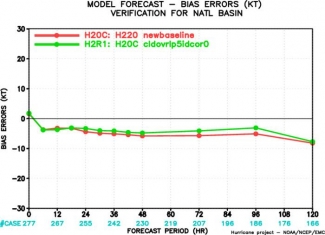 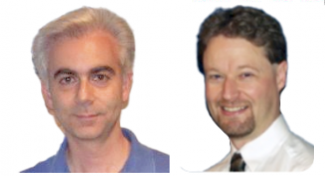