As visitors to the DTC in 2016, Michael Iacono and John Henderson of Atmospheric and Environmental Research (AER) used the Hurricane Weather Research and Forecasting model (HWRF) to investigate an improved way of representing the vertical overlap of partial cloudiness and showed that this process strongly influences the transfer of radiation in the atmosphere and can impact the evolution of simulated tropical cyclones.

Clouds are a critical element of Earth’s climate because they strongly affect both the incoming solar (or shortwave) energy, which fuels the climate system, and the thermal (or longwave) energy passing through the atmosphere. Understanding the way that clouds absorb, emit, and scatter radiation is essential to modeling their role effectively.

One limitation to simulating clouds accurately is the challenge of representing their variability on scales smaller than the typical grid spacing of a dynamical model such as HWRF. Individual cloud elements are often sub-grid in size, and radiative transfer through fractional clouds strongly depends on whether they are vertically correlated such as for deep, convective clouds, or uncorrelated such as for randomly situated shallow cumulus under high clouds. 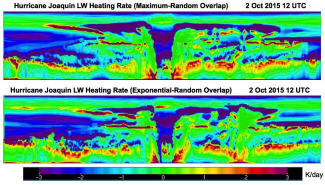 Height by longitude (west to east) cross-section of longwave radiative heating rate through the eye of Hurricane Joaquin as simulated by HWRF using different cloud overlap methods. The x-axis spans roughly ten degrees of longitude across the HWRF inner domain, and the linear vertical scale extends from the surface to the model top at 2 hPa while emphasizing the troposphere.

Using the Rapid Radiative Transfer Model for Global Climate Models (RRTMG) radiation code in HWRF, the primary objective of this project is to examine the effect of replacing the default maximum-random (MR) cloud overlap assumption with an exponential-random (ER) method, which has been shown to be more realistic relative to radar measurements within vertically deep clouds. The MR approach forces a condition of maximal overlap throughout adjacent partly cloudy layers, while the ER method relaxes this restriction by allowing the correlation to transition exponentially from maximum to random with vertical distance through the cloudy layers.

A first step in assessing this change in HWRF is to show that it alters radiative heating rates enough to affect the development of a tropical cyclone (TC), since heating rates, along with surface fluxes, are the primary means by which a radiation code influences a dynamical model. For Hurricane Joaquin, a 2015 Atlantic basin storm with an unusual track that was challenging to predict, each overlap method causes longwave and shortwave heating rates to evolve very differently within and near the storm over multiple five-day HWRF forecast cycles. Over time, these changes modify the temperature, moisture and wind fields that exert a considerable influence on the predicted strength and movement of Joaquin. 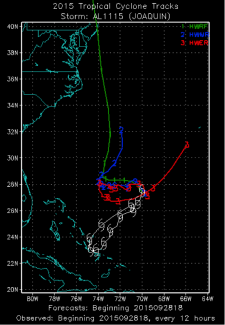 The full impact on TC track and intensity remains under investigation, since the cases studied to date respond very differently. Hurricane Joaquin track forecasts are dramatically altered in some forecast cycles, while more modest track changes are seen for storms embedded in strong steering flows such as East Pacific Hurricane Dolores from 2015 and Atlantic Hurricane Gonzalo from 2014. Intensity impacts are also case-dependent with improvement seen in some Joaquin forecast cycles and degraded intensity forecasts in other cases.

Our interaction with the DTC was a rewarding opportunity to acquire new insights on this topic, and we will pursue further research collaborations with the DTC and the NOAA/EMC Hurricane Team in the future.