Who's Who: Molly Smith

Molly Smith is one of DTC’s NOAA collaborators on our staff, and recently became one of the leads for METplus. Her background is in tropical meteorology, and she is the primary developer for the METexpress visualization system.

Molly grew up in the chaparral on the edge of the Mojave Desert in Southern California. It does not rain very often in that part of the country, but when Molly was five, a strong El Niño flooded her hometown, turning the streets into rivers. From that moment on, she became very interested in learning how the weather works. Her parents, who are both artists, were very surprised that they had somehow produced a meteorologist, but encouraged her by getting lots of books about the weather and later sending her to science camp. Molly went on to get a bachelor’s in atmospheric science at Cornell University, and then a master’s in the same field at the University at Albany, where she examined various models’ performances in simulating the landfall of Hurricane Irene (2011).

While at the University at Albany, Molly realized that she really enjoyed writing software, and that her ideal career would be one that combined both meteorology and programming. She was able to find exactly what she was looking for, and in 2017 started work as part of the NOAA Global Systems Laboratory (GSL) model verification team. There, she became the lead developer for GSL’s Model Analysis Tool Suite (MATS), which continues to be one of her primary responsibilities to this day. MATS is a lightweight, quick-start visualization suite which allows GSL’s model developers to quickly compare the skill of individual models and ensembles, as well as assess the performance of models under development. MATS also enables developers to produce publication-quality interactive graphs in a web-based framework, without needing to write their own code, and to perform a focused analysis of interesting weather features.

In 2019, the DTC began work on a spin-off of MATS that would display statistics produced by its METplus verification suite, with Molly again as the lead developer. This project became known as METexpress. METexpress was intended to work in tandem with the existing METplus visualization suite, METviewer. METviewer is a very powerful tool for performing in-depth analyses of verification data, but it can have a learning curve for new users. METexpress, therefore, is intended to fill this gap by giving users an intuitive interface with which they can easily produce common plot types and assessments. METexpress has greatly aided the adoption of METplus at GSL, allowing model developers to produce unified verification system-derived statistical plots in a familiar setting. This year Molly became the GSL team lead for METplus, and hopes to contribute further to the evolution of this excellent and versatile verification software package.

Outside of work, Molly can usually be found going for long walks, hiking, and catering to three very opinionated cats. She also has an extensive book collection and will eventually need to find places for more shelving. She regards this as a good problem to have. 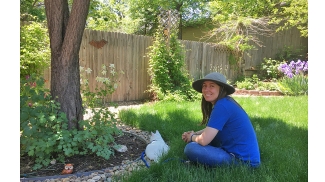 Molly with her cat.