Within the effort to unify the NCEP operational model suite, taking place under the Unified Forecast System (UFS) umbrella, a key area of interest is the evolution of legacy operational, convective-allowing systems to a new, unified Finite-Volume Cubed-Sphere (FV3)-based deterministic and ensemble storm-scale system called the Rapid Refresh Forecast System (RRFS). The ongoing transition from the existing NOAA NWP systems to the UFS is a major multi-year undertaking, with the RRFS targeted for initial operational implementation in late 2024. As part of the UFS, a new model-development paradigm is taking shape that focuses human resources and expertise from across the meteorological community on fewer systems, allowing for effective model development, and ultimately improved forecast skill, across the full NCEP modeling suite. In addition, simplification of the operational NCEP suite will optimize existing and future high-performance computer resources as well as reduce the overhead associated with maintaining multiple systems.

In order to successfully replace legacy regional prediction systems (i.e., the NAM nests, HREF, RAP, and HRRR) in favor of a single regional, convection-allowing ensemble, a phased retirement approach will be necessary and employed to ensure that the RRFS performs on par with each convective-allowing model. Progression toward an eventual operational implementation of the RRFS requires coordinated development across several, interconnected areas spanning the dynamic core, data assimilation, and chosen physics suite. Integral throughout this process is careful objective and subjective diagnostic analysis of forecast output in the forms of case studies and metrics as development of the RRFS evolves. In addition, continued engagement of model-development groups across NOAA, academia, the private industry, and input from stakeholders and end users is critical. To this end, a testing and evaluation framework is needed to incrementally assess various innovations from the community in a thorough and transparent manner, as model development is evaluated for potential inclusion in the RRFS. 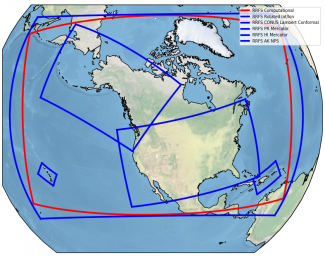 In preparation for this work, the DTC has been partnering and collaborating closely with teams including the UFS-R2O Short-Range Weather/Convection-Allowing Model (SRW/CAM) sub-project and several additional UFS-R2O cross-cutting teams to address the need of assessing RRFS performance.

As part of this initiative, the DTC recently completed a thorough comparison of the GFS versus the NAM and RAP using METviewer scorecards to inform the beginning stages of the legacy regional model retirement process. For the upcoming year, the DTC’s role in the UFS-R2O SRW/CAM sub-project will continue by establishing and exercising an agile benchmark testing framework through which output from end-to-end RRFS prototypes can be quickly verified using standard observational data and compared to verification of the operational CAM-based regional systems. This verification capability will be modeled after the coupled system, benchmark testing paradigm currently being used for global system evaluations at EMC, and will be run over important RRFS retrospective periods large enough for statistical significance, but small enough to allow for rapid prototyping and turnaround. The ability to iteratively evaluate RRFS prototypes against both observations and legacy, operational systems will provide model developers with not only a baseline for the current RRFS prototype, but also the ability to identify future development work and areas for potential innovation on a timely basis, crucial for an on-time delivery of the RRFS into operations in FY24. Regular evaluation of RRFS prototypes will also allow the community to participate through continuous engagement, facilitating collaboration from across the weather enterprise.

Extensive SRW App development has taken place over the past year, including integration of the advanced Model Evaluation Tools (METplus) into the App workflow, the result of several DTC testing and evaluation (T&E) projects. Using recent advances in the workflow, as well as new verification functionality established in these efforts, work on an RRFS agile testing framework will begin with the goal of providing this framework to the community by the spring of 2023. To this end, Agile framework development will be contributed to the authoritative SRW App repository for future distribution through the develop branch as well as in an upcoming release of the SRW App. It will also facilitate evolving prototype T&E activities. The successful implementation of the RRFS will depend on using the framework to rapidly evaluate multiple prototypes, an effort that will be based on both DTC evaluation and collaborative engagement of the weather community to take part in testing subsequent prototypes. One potential avenue for this kind of community engagement is the DTC Visitor Program. 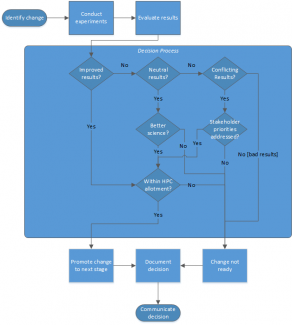