Who's Who: Ka Yee Wong

Ka Yee Wong was born in Hong Kong, the British colony once known as “The Pearl of the East,'' before the 1997 handover to China from the British government. She grew up in a large family, the fifth of six children (four sisters and a brother). Ka Yee was very active in school sports, shining as the only girl who played competitive ping pong and basketball with the boys. As a child, Ka Yee loved exploring the outside world, especially gazing up at the sky. In her words she “loved watching the clouds moving from one part of the sky to another, rain falling from the sky, lightning during a storm, and her favorite was looking out of the window when a typhoon made landfall.”

Science was her favorite subject in elementary school. This was further fueled by her trips to the public library to read science books even though she couldn’t yet understand English at that age. But just the pictures in these books inspired her so much that she wanted to learn more, and this inspiration motivated many of her future educational choices.

She grew up in a typhoon hotspot influencing her desire to be a typhoon forecaster who would serve the safety of her fellow citizens by predicting the weather. She attended UCLA where she received her undergraduate degree with a double major of atmospheric/oceanic sciences and mathematics, then earned a masters degree in atmospheric sciences. In graduate school, she was a teaching assistant for the meteorology and air pollution classes, where she discovered that she had a talent and love for teaching. Her master thesis work explored how microphysics schemes and initial environmental relative humidity impact the hurricane track and intensity performance in WRF idealized simulations without the presence of land, thus WRF simulations solely over water.

Currently, she is a CSU CIRA Associate Scientist who has been actively involved with several diverse projects since finishing graduate school in 2009. Many of these projects made a lasting impression on her. She gained a great deal of knowledge and inspiration from projects such as the Nonhydrostatic Icosahedral Model (NIM), WRF-CHEM, Unified Post Processor (UPP), and High-Resolution Rapid Refresh Smoke (HRRR-smoke). From a series of NWP model projects such as the MM5 (undergraduate), WRF (graduate+early career), and FV3 (current model), she saw how the models evolved and became more sophisticated. Ka Yee is very proud to be a member of the meteorological community, to contribute her knowledge, and further dedicate her career to this field.

Ka Yee explained to her oldest son, now 8, that her job working on weather models requires a lot of software development or “coding.” She made the analogy of how it is similar to playing video games. Each player tries to advance to each higher level of the game until the end, so her job is to write/debug code to advance toward her goal and move on to the next level as well. She loves her job and enjoys every day of work.

She married her husband Athanasios, who is of Greek origin, on a numerically auspicious day, 2011-11-11. In so doing, they also married the two ancient cultures and traditions of their families. She is now a mother of three children, with two young boys and a 6-month old daughter. Her family is very active; enjoying basketball/ snowboarding/ hiking/ video gaming/ and travel. Ka Yee is looking forward to the future and how it will unfold both for advancements in forecast models as well as her children as they grow up and navigate their own lives. Her personal mantra is: In our journey of life, we will certainly encounter many storms. Even so, we will endure as we pass surely and steadily through every storm of life. After each storm comes the rainbow! 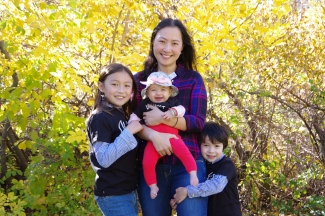