My involvement in model physics development and coordination for operational use, in both Europe and the U.S., has afforded me an interesting and rewarding perspective on the unique philosophies and approaches taken along the path of research to operations on both sides of the Atlantic. In many ways, the challenges faced by large organizations or collaborative consortiums when developing/selecting physics for operations are very similar for Europe and the U.S. For instance, when scientists have invested a significant portion of their careers in their physics development, agreeing on best practices often becomes emotional and personal, and the process of selecting physics for operations can even become territorial. On the other hand, thanks to disparate policies regarding model open-source code, license agreements, and memorandums of understanding (MoU) in European regional model development, the approaches to physics parameterization research to operations (R2O) also diverge significantly between Europe and the US.

It is extremely important that communication and trust is established among the involved parties, and I strongly believe that we are on the right track during this exciting time for NWP in the US.

The U.S. has been immensely successful convening academia in numerical weather prediction research in general, and in physics development in particular, thanks to the WRF community. To a large extent, this is also realized in the development of physics parameterizations for the UFS through the introduction of the Common Community Physics Package (CCPP). In Europe, on the other hand, the closed source and various MoUs among participating nations have caused serious challenges involving academia in developing relatively recent versions of model code - in particular, in the regional model community. The European Centre for Medium-Range Weather Forecasts (ECMWF) has been more successful than the European limited-area model community in this regard with the release of the open Integrated Forecast System, IFS; although, this scaled-down academic version still lags behind operational releases. However, the European approach whereby one suite is developed, improved, and continuously refined in close collaboration with the developers of the different components - again drawing the parallel to ECMWF - is compelling, and also notably successful. It works because the research scientists who are developing the cloud microphysics scheme sit next door to the scientists working on convection and Planetary Boundary Layer (PBL) schemes, and they all work in the same building as the operational branch. A similar approach is also seen in the regional model community in Europe, as model physics suites are developed and refined in a collaborative manner within different consortia (e.g. HIRLAM, ALADIN, COSMO), under strict MoUs. In the US, the challenge with open source and community involvement is instead the coordination and organization piece. The know-how needed to combine different physics schemes that interact in complex ways, contributed from all over the world, into a functioning suite suitable for operations pose an array of challenges. In a large organization such as NOAA this coordination does not take place by simply walking down the hall to see your favorite convection-parameterization developer, because schemes are contributed by a wide variety of universities, research labs, and operational centers. Can we combine the best of both worlds?

Our approach to the UFS R2O project has been to work under a new paradigm in regards to physics development for operations at NOAA. EMC and the OAR labs, as well as DTC, work closely together on a common suite aimed for operations. Some frustration associated with operational implementation is the feeling of always having to “put out fires,” chasing systematic errors, instead of having the liberty of thinking long term to include advanced process descriptions. In this project we are aiming to find a balance between the two, in a two-stream approach addressing both short-term needs and long-term goals. The long-term goal is a seamless (across space and timescales) physics parameterization suite that aims to unify, to the extent possible, processes that represent vertical mixing and cloud formation. The key here is to approach the challenge as a unified representation of physical processes with a well thought out conceptualization of the final suite, and avoid patching together existing schemes as an afterthought. However, we recognize the limitations in scope of the R2O project as such, as funding is only available on a year-to-year basis, and thus hope that this project can be a long-term sustained activity, so that our goals in developing a next-generation physics suite can be realized. Another challenge we are facing is the extremely rapid development of the rest of the coupled model system that constitutes the UFS, such as a new land-surface scheme, coupled ocean, ice and waves, chemistry, stochastic physics, and fully coupled data assimilation. For our project to be successful, it is extremely important that communication and trust is established among the involved parties, and almost a year in, I strongly believe that we are on the right track during this exciting time for NWP in the US. 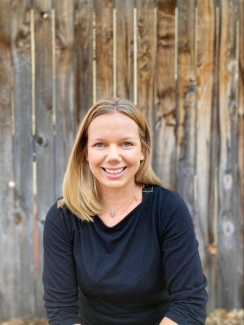 Lisa Bengtsson is a scientist/meteorologist at the University of Colorado/NOAA Earth System Research Lab. She shared her perspective on her work with the UFS R2O physics development project for this Director’s Corner article. She co-leads this sub-project with Jian-Wen Bao, PSL, and in close collaboration with Fanglin Yang, EMC.