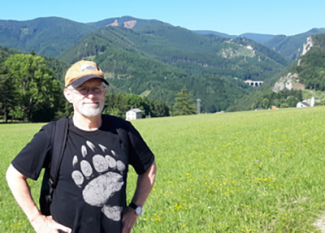 My projects with the DTC Visitor Program have been high points in my 30+ year career as a computational scientist interested in atmospheric sciences.  In 1986 as a Staff Sergeant in the United States Air Force, I discovered my deep interest and aptitude in computer science, and uncovered a new fascination with science, especially the geophysical kind. It inspired me to chart a course towards finally finishing my BS degree and explore graduate school with the notion of applying supercomputing to atmospheric science. From the beginning, I had this view of NCAR as a highly respected institution, but wasn’t sure I ever really envisioned myself spending time there.

Fourteen years later, my first DTC visit was 2010-2011; my research focused on the enhancement of prototype HRRR Alaska NWP forecasts we had been performing at the University of Alaska’s Arctic Region Supercomputing Center (ARSC). We had been running the HRRR-AK multiple times per day, and identified a need for tools that would allow us to build custom products to compare forecasts with observations using the Model Evaluation Tools (MET) and Gridpoint Statistical Interpolation (GSI) software for data assimilation. For a deeper dive on this project, take a look at the report.

Volcano eruptions tend to be one-time, unscheduled events. Figuring out where the ash will go is a time-critical event, with financial impacts in hundreds of billions USD in air transport.

The second DTC project grew its roots during an enlightening meeting I had with Geoff DiMego, then Chief, Mesoscale Modeling Branch at NOAA, in 2009.  During this time, I learned of the evolving NOAA Environmental Modeling System / Nonhydrostatic Multiscale Model on the B-grid (NEMS-NMMB) development and deployment in the NCEP operational environments, and became curious  about how we might apply this research to our own Alaska weather-modeling efforts. I teamed up with Dr. Dèlia Arnold, a scientific consultant with Vienna, Austria’s Zentralanstalt für Meteorologie und Geodynamik (ZAMG). The primary focus for our project was to explore the deployment of NEMS/NMMB to a non-NCEP environment for potential future community use.

The great challenges were adapting the NEMS/NMMB — which had been explored primarily on NOAA systems using Intel compilers — to a broader collection of computing platforms and regional model domains. Through a concerted  effort, we were able to port the system to Gnu-based Linux environments ranging from typical workstations to Cray supercomputers, and NCAR’s Yellowstone. We also explored the creation of regional simulations over Alaska and Catalonia and launched a temporary NEMS/NMMB Alaska region real-time forecast system — using many of our existing HRRR-AK workflow programs to drive this — on the Cray XK6m at the University of Alaska Fairbanks Arctic Region Supercomputing Center. If you’re curious about how this project moved forward, read the story here.

In 2020, I commenced my current DTC project, which in many ways, has roots dating back to the turn of the century when I started collaborating with “The Grid” community.  Of particular interest for me back then was the potential of The Grid to make complex and computationally intensive models available to Joe or Jane Scientist, while avoiding  the complexities of command lines, operating systems, etc. The vision was that users would go to a web page, specify parameters, etc. through an intuitive GUI, and launch the job, not necessarily knowing or caring how and where the model was actually being executed.

The vision is ambitious, and the specific outcomes for the DTC project include the development of low-level command-line tools that will allow users to create custom and complex NWP workflows by using the DTC NWP Docker containers as loosely-coupled independent software services deployed in the Amazon Cloud.

So, I find myself approaching the end of a mostly enjoyable and fascinating career, having had the wonderful opportunity to serve DTC and the wider NWP community to make some inroads toward realizing this vision.  The project is ongoing, and a recent status update was presented at the 2021 UCAR Software Engineering Assembly’s Improving Scientific Software Conference.

After more than thirty years in the academic world, Don currently spends his time living in Interior Alaska as owner/manager of the single-member LLC, Boreal Scientific Computing, pursuing research and development activities.

Figure above: Don's Boreal Scientific Computing Headquarters with a moose out front.
Contributed by Don Morton