Director's Corner: The Age of EPIC: What does this mean for DTC?

In 2017, Congress instructed NOAA to establish the Earth Prediction Innovation Center (EPIC) to advance “observational, computing, and modeling capabilities to support substantial improvement in weather forecasting and prediction of high impact weather events.”  What will the details of EPIC look like?  EPIC has not yet been formed, so the community doesn’t know, and it’s not yet clear that NOAA knows either.  Hopefully, it can achieve its goal to improve accessibility to the operational code and data so that scientists across the entire weather enterprise community, both research and operations, can collaborate more easily, leading to more timely identification of forecasting challenges and adoption of forecasting improvements.

Both UFS and EPIC need to coordinate closely with academic, research labs, private companies and across multiple agencies. Fortunately, DTC already does this in their everyday work.

This goal sounds familiar to anyone who has worked with DTC, because this is a significant portion of the core work that DTC has been doing successfully for many years.  When browsing the research and tool development performed by (and supported by) DTC, one finds numerous examples of impactful R2O ranging from parameterization development to widely adopted model validation strategies and tools. So, with EPIC poised to take on workflow and tool development traditionally done by DTC, what will DTC’s new role be in the Age of EPIC?

In preparation for inevitable change, DTC has already begun preparing by starting with a critical examination of its own software portfolio, and steps have been taken to ramp down support of some products. Ongoing products will still be supported, but are being shifted toward more community-based support and development strategies. Likewise, research and support of testing and evaluation (T&E) activities have ramped up, which have fostered new partnerships.

DTC is also playing a significant role in supporting the Unified Forecast System (UFS).  The UFS is a key component of NOAA’s effort to share code with the community and implement model improvements with the envisioned EPIC framework acting as its software and platform support.  In addition to supporting UFS workshops, DTC is also helping to develop and manage the Common Community Physics Package (CCPP), which includes a framework and physics schemes for the atmospheric portion of UFS, and METPlus, which is used for validation and verification in the UFS system. 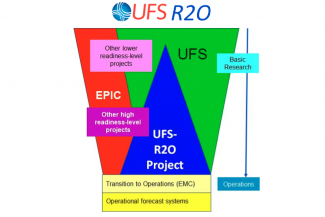 The UFS-R2O Project is a subset of the UFS supported by NOAA that focuses on the transfer of innovations into operations, see the lower part of the funnel. EPIC is a new NOAA initiative that will be providing infrastructure and user support. (Image from NOAA/NWS/OSTI-Modeling.)

To build a successful entity, both UFS and EPIC need to coordinate closely with academic, research labs, private companies and across multiple agencies. Fortunately, DTC already does this in their everyday work.  NOAA should leverage DTC’s deep expertise in model development and verification, broadening software accessibility, and building R2O/O2R collaborative teams to ensure EPIC’s success.

As a professor at University of North Dakota (UND), I had the pleasure of working with DTC in multiple capacities.  From 2015-2016, a graduate student and I collaborated with DTC through the DTC Visitor Program on a project focused on convective-allowing model verification using MODE. It was a great introduction to the many useful tools developed and supported by DTC.  I collaborated again through the Big Weather Web project and development of a containerized version of WRF, which is still used in numerics classes at UND.  Most recently, I have served for two years as an academic member of the DTC Scientific Advisory Board.  Now that I am the Director of MMM, I look forward to continued collaborations in my new role. 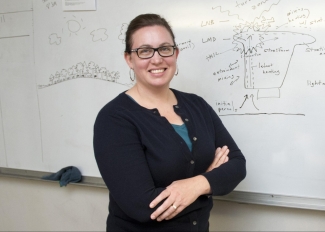