The community aspect of NOAA’s Unified Forecast System (UFS) is off to a strong start with the release of the UFS Medium-Range Weather Application v1.0 on 11 March 2020.  The planning and preparations for this release were truly a community effort that convened a multi-institutional team of scientists and software engineers from NOAA’s Environmental Modeling Center (EMC), NOAA research laboratories (Global Systems Laboratory [GSL], National Severe Storms Laboratory [NSSL], Physical Sciences Laboratory [PSL], and Geophysical Fluid Dynamics Laboratory [GFDL]), Cooperative Institutes (Cooperative Institute for Research in Environmental Sciences [CIRES] and Cooperative Institute for Research in the Atmosphere [CIRA]), the Developmental Testbed Center (DTC), the National Center for Atmospheric Research (NCAR) and George Mason University (GMU).  This multi-institutional Release Team was assembled in September 2019, and charged with developing a streamlined project plan for the first public release of UFS, and then overseeing and executing this project plan. The aim was to build a well documented UFS modeling system that the community can download, set up, and run in multiple computing environments.

The UFS is undergoing rapid development across multiple fronts to achieve its vision of meeting the needs for applications spanning from local to global domains and predictive time scales from sub-hourly analyses to seasonal predictions; therefore, an important first step was to define the scope of this initial release.  The team quickly converged on a plan that focused on global configurations for four different resolutions and two supported physics suites: the operational GFSv15 suite and an experimental physics suite under development for GFSv16.  To provide the community with some flexibility on which forecast cycles the model could be run, the team decided it would be important to include the capability to initialize the model using more widely available GRIB2 output.  The team also prioritized the portability of this complex software system, testing on multiple platforms, providing a robust, user-friendly workflow, assembling documentation, and establishing a support mechanism. 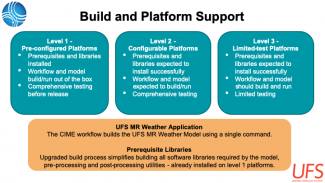 To address the portability priority, a small team overhauled the build system for the NCEP libraries, an area that has been an ongoing issue since the DTC first started working with EMC to make their operational codes more accessible to the community.  The NCEP libraries are the underpinnings of everything from the model code to the pre- and post-processing software.   Improvements to the build system also included the model itself.  While there’s always room for further improvement, the outcome is a package that is straightforward to build on different computing platforms, as well as using different compilers.  These platforms include NOAA’s research HPC, NCAR’s Cheyenne, and TACC’s Stampede2, as well as generic MacOS and Linux systems.  The team went one step further by establishing pre-configured platforms, which are platforms where all the required libraries for building the UFS community release are available in a central place.

To meet the needs of a robust, user-friendly workflow, the Release Team selected the Common Infrastructure for Modeling the Earth (CIME), a Python-based scripting infrastructure developed through a multi-agency collaboration (NSF, DOE, NOAA).  CIME, which now supports four distinctEarth modeling systems (CESM, E3SM, NORESM, and UFS), provides the user with the ability to create experiments by invoking only four commands.

To establish a solid foundation from which to build upon, and lighten the load for future releases, the team developed version-controlled documentation that is stored with the code and can be continuously updated.  For ease of navigation, the documentation can be displayed electronically and is easily searchable.  Building this framework and assembling all the pieces was a significant undertaking that relied on contributions from a number of subject-matter experts. 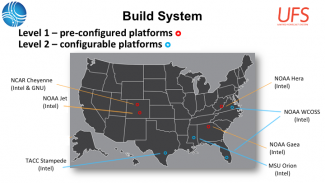 With an eye towards engaging the broader community in all aspects of the UFS, the Release Team selected community forums as the best approach for providing user support.  These forums are publicly viewable and users can post new topics and responses to existing topics by becoming registered users.  Bugs and deficiencies in the documentation brought to light by postings to the UFS forums are catalogued and will be addressed in future releases.

The feedback from the community about the UFS MRW Application v1.0 release has been very positive.  Bugs in the code and deficiencies in the documentation brought to light by postings to the UFS forums are being catalogued, as well as feedback collected through the Graduate Student Test set up by the UFS Communications and Outreach Working Group, and work is underway to address these issues through the release of UFS MRW Application v1.1 in the coming months.  In addition, planning and preparations are underway for the release of the Short-Range Weather Application v1.0 later this year, which will provide the community with the capability to run a Stand-Alone Regional configuration of the UFS-Atmosphere model.