Visitors: The impacts of including aerosols in the radiance observation operator on analysis using GSI

The GSI is able to assimilate observations from conventional and remote sensing instrumentation. For the remote sensing measurements, it provides the functionality to assimilate the retrieval products and the radiances in the form of brightness temperature (BT). To assimilate the radiances directly into GSI, the community radiative transfer model (CRTM) employs the radiance observation operator to calculate the BT of the model state, and uses the adjoint model to translate the first-guess departure of BTs to the analysis fields.

When using DAS, aerosols are often excluded in the computation of BTs. In reality, aerosols influence the radiative transfer in the atmosphere, including the incoming and outgoing shortwave radiation, and the outgoing terrestrial radiation. The fact that aerosols impact the remote sensing measurements implies that the absence of aerosols in BT simulation may introduce biases into DAS. In the current release of GSI v3.7/CRTM v2.2.6, the functionality to account for the impacts of aerosols on the BT derivation is available. However, it only considers the aerosol species provided by the Goddard Chemistry Aerosol Radiation and Transport (GOCART), which includes five bins for dust, four bins for sea salt, hydrophobic and hydrophilic black and organic carbon, and sulfates.

Our visitor project includes two key aspects: (1) add a regression test for the aerosol-enabled radiance observation operator, and (2) investigate the impacts of including aerosols in the radiance observation operator on the analysis fields. Both tasks used the latest master branch of GSI and were conducted on Hera, which is NOAA’s R&D High Performance Computing (HPC) system maintained by the NOAA Environmental Security Computing Center (NESCC).

A new regression test (“global_C96_fv3aerorad”) was introduced to ensure the functionality of aerosol-aware BT derivations in GSI/CRTM. This regression test applies the same first-guess files as the regression test for aerosol DA (“global_C96_fv3aero”), which performs the aerosol analysis using satellite aerosol optical depth (AOD) observations on 00Z June 22, 2019. The first-guess files are taken from the aerosol member of the Global Ensemble Forecast System (GEFS-Aerosol v12), which uses the Unified Forecast System FV3 dynamic core coupled with the GOCART aerosol module.  GEFS-Aerosol is slated to replace the current aerosol forecast model by late 2020. The aerosol fields in the first-guess files provide the 3-dimensional multi-speciated aerosol distributions for the BT calculation by CRTM.

Figure 1. (a) Temperature analysis difference at 925 hPa between the AER (aerosol-aware) and the CTL (aerosol-blind) run and (b) the aerosol total column mass density (kg m -2 ). Figures are plotted with Panoply Data Viewer by NASA.

Figure 2 illustrates the impacts on BT after including aerosols in the radiance observation operator. Figure 2a shows the BTs at 10.39 µm from Infrared Atmospheric Sounding Interferometer (IASI) on METOP-A, Figure 2b gives the corresponding BTs simulated in CTL, and Figure 2c shows the simulated BT difference between the two experiments (AER – CTL). The comparison of Figure 2a and 2b show that CTL overestimates BT in several regions, such as the tropical Atlantic Ocean near the Africa coast (~5ºN and 15ºW), the east side of Papua New Guinea, and the Northwest Pacific Ocean near Philippines, and Japan. In these regions, the simulated BTs in AER are cooler than CTL (Figure 2c) which implies a better agreement with the observations. It needs more investigation to address impacts of these aerosol-aware first-guess departures on analysis. 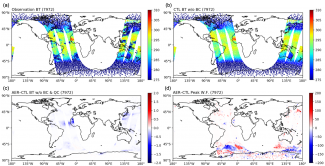 Figure 2. (a) Observed BT; (b) Simulated BT from the CTL (aerosol-blind); (c) First guess departure difference (AER – CTL) before BC and QC; (d) Difference in the pressure level (hPa) of the peak in weighting function for IASI onboard METOP-A. All the data are from the analysis cycle on 00Z June 22, 2019.

GSI/CRTM provides the capability of accounting for aerosol effects in the BT derivation. Single-cycle experiments revealed that considering aerosol information in the CRTM radiance operator could introduce cooler simulated BTs, adjustments to the weighting function, and changes to atmospheric temperature analysis. Despite the sensitivities presented in this report, further studies are needed to explore how to incorporate the aerosol information properly through quality control (QC) and bias correction (BC) in DAS. Such efforts are needed to exploit this new option toward enhancing the analysis system and thus, weather forecasting.

The author thanks DTC for facilitating this graduate student project, and is very grateful to valuable guidance from Drs. Ming Hu and Guoqing Ge. The author also thanks the input from his academic advisor, Dr. Cheng-Hsuan (Sarah) Lu, and University of Albany colleague, Dr. Dustin Grogan. 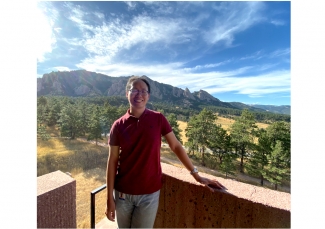