Visitors: Evaluating the Impact of Model Physics on Forecasts of Hurricane Rapid Intensification

Dr. Jun Zhang, a scientist from the University of Miami and visitor to the DTC in 2018, investigated the impact of model physics on the forecast performance of hurricane models for hurricanes undergoing rapid intensification (RI). Accurate predictions of hurricane intensity could significantly reduce the economic loss, especially if a hurricane makes landfall at well-developed coastal regions.

Hurricane intensity is influenced not only by environmental factors but also by internal dynamics and thermodynamics. Previous research based on statistical modeling suggested that around 35% of the skill of predicting hurricane RI in the Atlantic basin is explained by processes related to the large-scale environment. What remains challenging is to realistically represent inner-core processes, especially in the physical packages of the hurricane models. As the horizontal resolution of the operational hurricane models such as the Hurricane Weather and Research Forecast (HWRF)  approaches 1.5 km, the performance of physics traditionally used in low-resolution models should be evaluated. Dr. Zhang’s research project focused on evaluating the impact of model physics in HWRF on hurricane RI prediction.

Dr. Zhang worked with DTC staff to design numerical experiments for this project. They created extensive HWRF forecasts with two different cumulus schemes.  The team also decided to use some existing HWRF forecasts from the Environmental Modeling Center (EMC) for evaluating the impacts of other physics on RI prediction.

Dr. Zhang split the HWRF retrospective forecasts into four groups: captured RI (Hit), missed RI (Miss), and predicted RI with false alarm (False Alarm). For each physics component, he evaluated the model’s performance for RI prediction by building a contingency table that summarizes the number of each group and calculating the Critical Success Index.  For a given component of model physics that shows substantial improvement in the RI forecast, he also conducted a detailed analysis of the TC structure to understand why the changes in model physics make the RI forecast better. 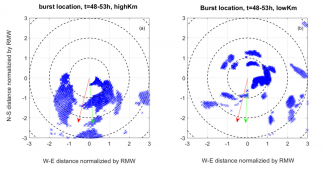 Horizontal view of convective burst locations during the period between 48 and 53 h of forecast time for HWRF forecasts of Hurricane Earl (2010) initialized at 1200 UTC 27 Aug 2010 with high-Km and low-Km boundary-layer physics. The red arrow indicates the shear direction. The green arrow indicates the tilt direction. Note that Km represents the vertical eddy diffusivity. RMW is the radius of maximum wind speed. This figure is taken from Zhang and Rogers (2019).

By analyzing these HWRF forecasts, Dr. Zhang found that both the cumulus and boundary layer schemes have substantial impact on HWRF’s RI prediction skill, while the impact of horizontal diffusion parameterization is relatively small. His case study of Hurricane Gonzalo (2014) showed that the Grell-Freitas cumulus scheme performs better in terms of hurricane structure forecast than the Simplified Arakawa-Schubert scheme. Another case study of Hurricane Earl (2010) showed that the strength of vertical turbulent mixing in the boundary layer regulates the vortex- and convective-scale structures and their interaction with the environmental wind shear. This multiscale interaction process is found to be crucial for hurricane intensification, which is recommended by Dr. Zhang to be considered in future physics evaluation and upgrades.

Dr. Zhang enjoyed his visit to DTC and found very valuable collaborations with DTC colleagues.  DTC provides a friendly environment for him. DTC scientists are very knowledgeable about model development and verification and provided great support for Dr. Zhang’s project.  The next step of his project is to analyze idealized HWRF simulations created by DTC in order to understand how model physics affects hurricane intensification dynamics. 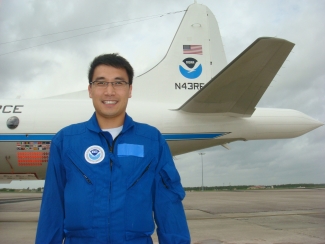