Jacob Radford, a Ph.D. student at North Carolina State University and visitor to the DTC during June of 2018, investigated the forecast skill of the High-Resolution Rapid Refresh (HRRR) model for banded snowfall events. In particular, he evaluated the HRRR’s ability to capture the location, areal extent, orientation, and aspect ratio of these locally enhanced regions of reflectivity. In theory, snowbands should be adequately resolved by the HRRR thanks to its fine grid-spacing, but model skill has not yet been assessed quantitatively.

Snowbands, or narrow regions of intense snowfall, present hazardous travel conditions due to rapid onset, high precipitation rates, and reduced visibility. Though there has been no quantification of the societal or economic impacts associated with snowbands, in particular, the economic costs of heavy snow events are estimated to be in the billions. Furthermore, mesoscale precipitation bands account for a significant portion of annual precipitation and were found to occur in a majority of cold-season precipitation events in the Northeast and Central U.S. Because these snowbands are small in scale, even the mere occurrence of snowbands is difficult to predict, not to mention the timing, location, and intensity. Thus, there is great incentive to improve understanding of the environmental conditions, physical processes, climatologies, and predictability of snowbands.

Jacob utilized the DTC’s Method for Object-based Diagnostic Evaluation (MODE) to match snowbands in the HRRR’s 1000-m reflectivity field to bands in national mosaicked base reflectivity fields. However, snowbands were defined based on local reflectivity heterogeneity rather than a set reflectivity threshold, a capability not possible in the current iteration of MODE. Thus, the primary goal of Jacob’s visit was to enable greater flexibility in MODE object identification. Jacob worked with Model Evaluation Tools (MET) developers Tara Jenson, Jamie Wolff, John Gotway, and Randy Bullock to implement these changes in MODE. The team quickly determined that the most practical way to accomplish this feat was to build a Python interface for MODE, allowing users to define objects in a Python script however they see fit and then input these objects into MODE via Numpy arrays or xarrays. This added functionality is a significant stepping stone for MODE user flexibility and is available as of MET v8.0.

With MET v8.0, Jacob could then define snowbands as a narrow region of reflectivity at least 1.25 standard deviations above the local reflectivity background, identified in HRRR-simulated and observed reflectivity, and matched with MODE based on similarity in location, area, orientation angle, and aspect ratio. The distributions of interest scores, or measures of the observation/forecast similarities based on these four properties, are shown in Fig. 1. The median interest score of 0.66 indicates that while the HRRR demonstrates some ability to match observed snowband cases, there are significant errors in at least two of the four interest parameters. Applying a cutoff of 0.70 to correspond to a reasonably well-forecasted case, only 30% of cases were well-forecasted by the HRRR. Ultimately, while the HRRR may be helpful in identifying areas of heightened snowband risk, it lacks forecast precision in location and timing. The next step in this work will be to apply a similar verification procedure to the HRRR ensemble to evaluate probabilistic snowband forecast skill. 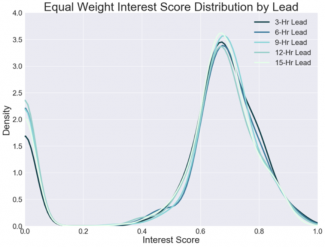 Jacob found collaboration with the DTC to be an extremely valuable experience vital to the completion of his Master’s research and a step towards his Ph.D. Everyone at the DTC was extremely friendly, accommodating, and knowledgeable about forecast verification. While Jacob wasn’t at the DTC, he spent his time exploring the Flatirons and Rocky Mountain National Park. 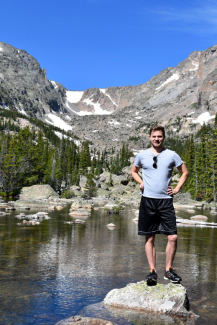 Jacob hiking the trails of Rocky Mountain National Park during one of his weekends in CO.