Visitors: Towards a better understanding of the vertical aerosol distribution in the atmosphere

On 14 April 2010, increasing volcanic activity, including explosive eruptions, were observed at the Icelandic volcano Eyjafjallajökull. The volcano was largely unknown by the general public until then. On that particular day, however, the volcano started ejecting fine ash into the atmosphere, which was advected towards continental Europe. Major disruptions of the air traffic across western and northern Europe were necessary in order to ensure aviation safety. Several countries closed their airspace, affecting approximately 10 million travelers all over the world and causing an enormous economic loss. 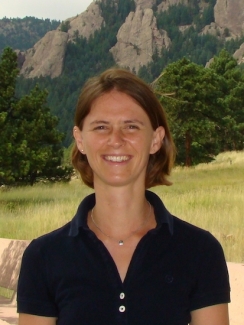 The widespread disruption of the air traffic could have been strategically localized and reduced had the horizontal and vertical dispersion of the ash plume been predicted with higher accuracy. At present, there is limited information regarding the vertical distribution of aerosols since aerosol observations are mainly surface-based in-situ measurements or vertically integrated measurements such as Aerosol Optical Depth (AOD). Ground-based LIght Detection And Ranging (LIDAR) measurements and LIDAR measurements from satellites can be used to close this gap. The aim of my DTC visiting scientist project is to implement the assimilation of vertically-resolved LIDAR measurements in the Gridpoint Statistical Interpolation (GSI) data assimilation system. This addition is expected to lead to improved knowledge of the vertical distribution of aerosols in the atmosphere and improved model forecasts. 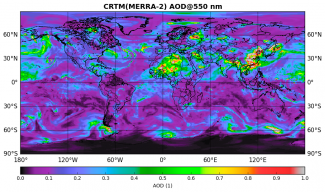 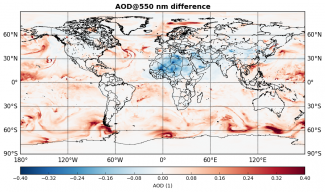 Figure 1. Global maps of AOD at 550 nm from CRTM (top) and AOD difference between CRTM and MERRA (bottom) on 17 April 2010. Positive differences correspond to CRTM AOD values larger than those for MERRA.

The backbone of high-quality aerosol data assimilation is a good radiative transfer model. We have implemented the simulation of aerosol extinction and backscattering coefficients into the Community Radiative Transfer Model (CRTM), which is embedded in the GSI and tested its performance. Global fields of Modern Era Retrospective-analysis for Research and Applications (MERRA) aerosol concentrations were used as input to calculate Aerosol Optical Properties (AOP). Figure 1 (top) shows AOD at 550 nm on 17 April 2010. Highest aerosol loads were found above the Saharan region in North Africa as well as in East Asia. High AOD in the northwestern part of Russia was caused by aerosols from the Eyjafjallajökull eruption. Comparing CRTM and MERRA (Fig. 1 bottom) reveals higher AOD in the CRTM over the oceans but lower values over continental regions with high dust load. 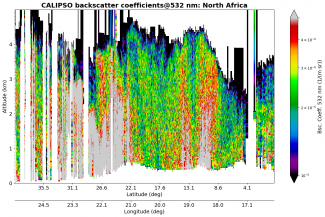 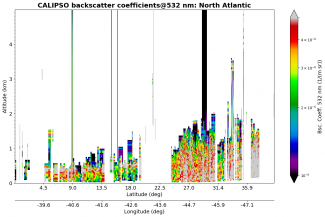 Figure 2. Vertically-resolved CALIPSO measurements of the backscattering coefficient at 532 nm from an overpass over North Africa (top) ​​​and the North Atlantic (bottom) on 17 April 2010.

To investigate these features, we selected a set of vertically-resolved LIDAR measurements from the Cloud-Aerosol Lidar and Infrared Pathfinder Satellite (CALIPSO) satellite obtained over North Africa and the North Atlantic (Fig. 2). The comparison between the models and the observations (Fig. 3) reveals a better performance of MERRA AOP over the dusty region in North Africa but a slightly better performance of CRTM over the ocean. Preliminary results suggest CRTM deficiencies in modeling the non-spherical shape of dust aerosols but a better parameterization of the hygroscopic growth of sea salt. These features, however, need to be investigated in more detail. 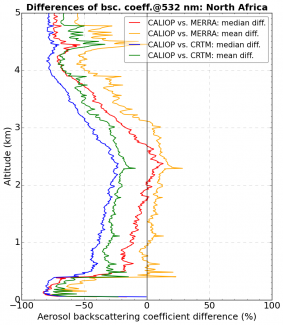 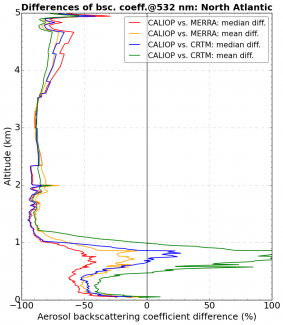 My visit at NOAA and NCAR is coming to an end but the project is not finished yet and I will continue my work from Austria. I’m very grateful to Benjamin Johnson (UCAR/JCSDA) and Mariusz Pagowski (NOAA/ESRL/GSD and CIRES/CU Boulder) who cordially hosted me during my DTC visiting scientist project, shared their knowledge and supported me whenever necessary. This project would not have been possible without the financial support of the DTC Visiting Scientist Program and the Horizon2020 project EUNADICS-AV (No. 723986).