Since 2007, the number of CAM ensembles examined in the HWT has increased dramatically, going from one 10-member CAM ensemble in 2007 to six CAM ensembles in 2015 that totaled about 70 members.  With these large and complex datasets, major advances were made in creating, importing, processing, verifying, and providing analysis and visualization tools. After the 2015 SFE it was clear that progress toward identifying optimal CAM ensemble configurations was being inhibited by the contributions of independently designed CAM systems created with different research goals. This made it difficult to analyze performance characteristics.  Furthermore, a December 2015 report by the international UCACN Model Advisory Committee, charged with developing a unified NOAA modeling strategy to advance the US to world leadership in numerical modeling, recommended that:

In the spirit of these recommendations and recognizing the need for more controlled experiments, SFE organizers developed the concept of the CLUE system.  Beginning with the 2016 SFE, the ensemble design effort was much more coordinated. All collaborators agreed on a set of model specifications (e.g., model version, grid-spacing, domain size, physics, etc.).  Forecasts contributed by each group could then be combined to form one large, carefully designed ensemble, which comprises the CLUE. The CLUE design for each year has been built around already existing funded projects led by external HWT collaborators.  Thus, HWT partners can run experimental systems to meet the expectations of their funded projects, and at the same time contribute to something much bigger.

During the last three years of the SFEs, the CLUE configurations have enabled experiments focused around several aspects of CAM ensemble design including: impact of single, mixed, and stochastic physics, data assimilation strategies, impact of multi-model vs. single model, forecast skill of FV3, microphysics sensitivities, and impact of ensemble size.  Collaborators have included the Center for Analysis and Prediction of Storms at the University of Oklahoma (OU), the National Center for Atmospheric Research, The University of North Dakota, the Multi-scale Data Assimilation and Predictability Laboratory at OU, NSSL, NOAA’s Global Systems Division of the Earth Systems Research Laboratory, and NOAA’s Geophysical Fluid Dynamics Laboratory.

The Developmental Testbed Center (DTC) has been a major contributor to the CLUE effort. To date, two DTC Visitor Program projects have involved examining the impact of radar data assimilation and mixed versus single physics using CLUE data.  Furthermore, DTC has led much of the configuration design and verification of CLUE stochastic physics experiments. Finally, CLUE data is being used in a Model Evaluation Tool development project directed towards providing the ability to produce a CAM verification scorecard.  Ultimately, the CLUE is a positive step towards improving US modeling and is already providing helpful insight for designing future operational systems, impacting broad sectors of the weather enterprise including NOAA’s efforts to develop a Weather-Ready Nation. 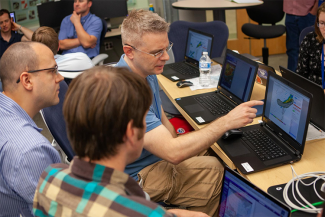