The first Weather Research and Forecasting model (WRF) Users’ Workshop was held in 2000. Since then, eighteen annual workshops have been organized and hosted by the National Center for Atmospheric Research in Boulder, Colorado to provide a platform where developers and users can share new developments, test results, and feedback. This exchange ensures the WRF model continues to progress and remain relevant.

The workshop program has evolved through the years. In 2006, instructional sessions were introduced, with the first focused on the newly developed WRF Pre-processing System (WPS). The number of users has grown since the WRF Version 3 release in 2008, so a lecture series on the fundamentals of physics was introduced in 2010 to train users to better understand and apply the model. Since that time, the series has covered microphysics, planetary boundary layer (PBL) and land surface physics, convection and atmospheric radiation. The series then expanded to address dynamics, modeling system best practices, and computing.

The 18th WRF Users’ Workshop was held June 12 – 16, 2017. The workshop was attended by 180 users from 20 countries, including 57 first time attendees, and 130 papers were presented. The first afternoon of the workshop, four lectures covered the basics of ensemble forecasting, model error, verification and virtualization of ensemble forecast products. The following days included nine sessions on a wide range of WRF model development and applications. On Friday, five mini-tutorials were offered on WRF-Hydro, Model for Prediction Across Scales (MPAS) for WRF Users, Visualization and Analysis Platform for Ocean, Atmosphere, and Solar Researchers (VAPOR), NCAR Common Language (NCL) and WRF-Python. All workshop presentations are available from http://www.mmm.ucar.edu/wrf/users/workshops/WS2017/WorkshopPapers.php.

Both data assimilation and model physics were improved in the operational application of WRF in the Rapid Refresh (RAP) and High-Resolution Rapid Refresh (HRRR) models. Advances were made in the Grell-Freitas cumulus scheme, Mellor-Yamada-Nakanishi-Niino (MYNN) PBL scheme and the Rapid Update Cycle (RUC) Land Surface Model (LSM). The HWRF operational upgrade included a scale-aware Simplified Arakawa Schubert (SAS) cumulus scheme, new Ferrier-Aligo microphysics schemes, and improved data assimilation. Other development and applications of WRF were also presented. Notably, the large-eddy simulation (LES) capability has been extended to many real-data applications in recent years.

There were two discussions during the workshop devoted to physics suites and model unification. Two suites of pre-selected physics combinations are now available in V3.9 that are verified to work well together for weather prediction applications. The second discussion was about model unification between WRF and the newer MPAS. While the two models remain independent, both are supported by the community and aspects of their development effort can be shared.

The next WRF Users’ Workshop will in June 2018. 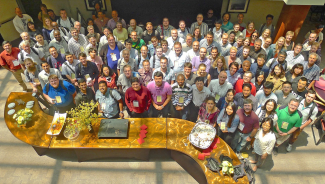