Autumn 2017
"Entraining a vibrant, diverse external community into NCEP global model development will bring broader dividends. ....Surely the U.S. can marshal its intellectual resources to do even better and create the world's best unified modeling system using the GMTB as a collaborative platform."

The DTC is at the core of an exciting new effort to more effectively bring the U. S. scientific community into the development of our national global weather forecast model, the National Centers for Environmental Prediction (NCEP) Global Forecast System (GFS).  This effort is part of NOAA’s ongoing Next Generation Global Prediction System (NGGPS) Program, which started in 2014.  NGGPS is a multimillion dollar effort to support implementation, testing and refinement of community-driven improvements that aim to transform the GFS into a unified weather and seasonal forecast system (UFS) with world-leading forecast skill.

Up to now, the GFS has been developed primarily within NCEP’s Environmental Modeling Center (EMC) in College Park, MD.  This has naturally led to barriers to effective participation of the external community. These barriers include lack of documentation about how to run the model and the implementation of the equations and parameterizations, limited model diagnostics and metrics, and lack of a well-organized and accessible code repository.  Two further issues are software engineering that does not easily support the testing of major changes in the model physics and dynamics, and complications in accessing NOAA high-performance computing resources for model testing.

At present, the GMTB supports the use of a single-column version of the global model. The single column is useful for running case studies that isolate particular physical processes such as stable boundary layers or tropical oceanic deep cumulus convection, and global atmospheric simulations with specified geographical distribution of sea-surface temperatures.  Global hindcast simulations can be evaluated using the same set of metrics currently used at EMC for weather forecasts, which focus on forecast lead times of 10 days or less.  GMTB has already performed an evaluation of an alternative cumulus parameterization scheme within GFS using this approach, and may soon be testing alternative microphysical or boundary-layer parameterizations.

To realize the vision of a unified model that can be used out to seasonal timescales, the GFS must also be systematically tested at lower grid resolution in an ocean-coupled mode.  A ‘test harness’ of hindcast cases must be implemented for evaluating model performance in that setting, in which skill in forecasting modes of low-frequency variability such as ENSO, the Madden-Julian Oscillation, and the North Atlantic Oscillation, as well as land-atmosphere coupling, becomes paramount.  Metrics of two-week to 6-month forecast skill must be agreed upon by EMC and the broader community and balanced with more typical measures of shorter-range weather forecast skill.   GMTB will need to implement both the test harness of coupled model simulations and the unified metrics suite.

Over the long term, GMTB will need to address a variety of other nontrivial challenges to be successful.  The most important is maintaining a close working relationship with EMC, such that the codes, metrics, and cases that EMC uses for evaluating new model developments for operational readiness are the same as those used by outside developers.  GMTB also needs streamlined access to dedicated high-performance computing such that a new user can quickly work on modifying and running GFS without lengthy delays in obtaining needed approvals and resources.  The above vision also places responsibility for GMTB to be the help desk for outside GFS/UFS model developers, which will require adequate trained staff and extensive improvement of model documentation. GTMB will need to play an important role in model evaluation, promoting transparent, trusted decision-making about what model developments are ready to be considered for operational testing and implementation (though NCEP will have the final word on what gets implemented for operations).   Lastly, an important issue for the future scope of GMTB is whether and how to bring data assimilation, another key element of the forecast process, into this vision.

Entraining a vibrant, diverse external community into NCEP global model development will bring broader dividends.  More eyes will lead to more insight into model strengths and weaknesses, and young scientists will naturally learn about GFS and provide a talent pool for making it a world-leading model. The framework of interoperability could be broadened to include climate models such as CESM, allowing further cross-talk between the weather and climate modeling communities. The UK Met Office has demonstrated the strength of this approach; surely the U. S. can marshal its intellectual resources to do even better and create the world’s best unified modeling system using the GMTB as a collaborative platform. 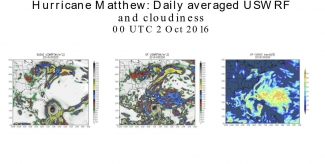