Who's Who: Evan Kalina

Evan knew he wanted to be a meteorologist when he was five years old -- every type of thunderstorm that blew through Kendall, FL enamored him. When Joe Cione, a hurricane researcher moved in across the street, his future career was sealed.

After graduating in 2010 from Florida State University with a B.S. in meteorology, Evan moved to Boulder for graduate school at the University of Colorado, where he analyzed model simulations and radar data from supercell thunderstorms. Cione serendipitously moved to Boulder about the time Evan graduated with his Ph.D. and invited Evan to do a postdoc. In that role he used similar techniques to the ones he used to study supercells and applied them to hurricanes. During his postdoc, he also became interested in writing and managing code efficiently. Joining the DTC has been a great opportunity to use and refine those skills further.

Evan currently works for the NOAA Earth System Research Laboratory Global Systems Division as the Node Activity Coordinator for the DTC Hurricane Task. His primary duty is to coordinate model development activities for the Hurricane Weather Research and Forecast (HWRF) system. He makes sure that model developers have access to the latest version of the HWRF code that runs operationally at NCEP, and that they can work within the HWRF code repository. This coordination helps transition innovations that improve the model forecast into operations. "It's satisfying to be on the cutting edge of numerical weather prediction," says Evan, "and to contribute to an operational system that is essential for protecting lives and property from hazardous weather." 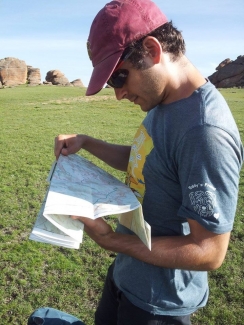 Evan enjoys the physical and mental challenges of the Colorado mountains and spends most of his spare time outdoors. He likes to run, bike ride, hike, and backcountry camp. He is slowly ticking off the Fourteeners – his favorites so far have been Longs, Pikes, and Crestone Needle. About a superpower he wishes he had: "The pack that I take hiking would be a lot lighter if I didn’t have to eat or drink…"

Evan's life highlights include seeing seven tornadoes while storm chasing in southeast Colorado the day he graduated with his Ph.D., flying through Hurricane Matthew on the NOAA P-3, and traveling to Iceland in the spring of 2015. 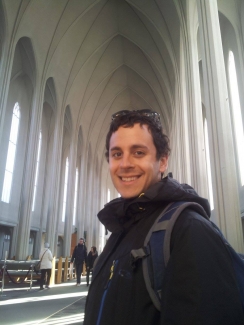