Bridges to Operations: Evaluation of the new hybrid vertical coordinate in the RAP and HRRR

The terrain-following sigma coordinate has been implemented in many Numerical Weather Prediction (NWP) systems, including the Weather Research and Forecasting (WRF) model, and has been used with success for many years. However, terrain-following coordinates are known to induce small-scale horizontal and vertical accelerations over areas of steep terrain due to the reflection of topography in the model levels.  These accelerations introduce error into the model equations and can impact model forecasts, especially as errors are advected downwind of major mountain ranges. 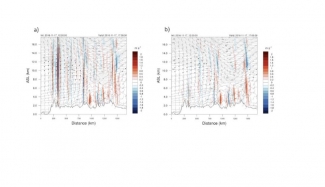 This is a cross-section plot of one set of cold-start RAP simulations. The figure highlights the reduction in spurious noise above the Rocky Mountains.

Efforts to mitigate this problem have been proposed, including Klemp’s smoothed, hybrid-coordinate, in which the sigma coordinate is transitioned to a purely isobaric vertical coordinate at a specified level.  Initial idealized tests using this new vertical coordinate showed promising results with a considerable reduction in small-scale spurious accelerations.

Based on these preliminary findings, the DTC was tasked to test and evaluate both the hybrid vertical coordinate and the terrain-following sigma coordinate within the RAP and HRRR forecast systems to assess impacts on retrospective cold-start and real-time forecasts.

The DTC conducted several controlled cold-start forecasts and one cycled experiment with the 13 km RAP, initialized from the GFS. This sample included days with strong westerly flow across the western CONUS, favoring vertically propagating mountain wave activity.  In addition, one cycled, 3-km HRRR experiment was initialized from the non-hybrid coordinate RAP.  The only difference between these retrospective runs was the  vertical coordinate.

This sample of forecasts indicated the hybrid vertical coordinate produced the largest impact at upper levels, where the differences in coordinate surfaces are most pronounced due to the reflection of terrain over mountainous regions.  As a result, wind speeds with the hybrid coordinate were generally increased near jet axes aloft as vertical and horizontal mixing of momentum decreased when compared with the terrain-following coordinate.  In addition, the depiction of vertical velocity at upper levels was greatly improved with reduced spurious noise and better correlation of vertical motion to forecast jet-like features.  A corresponding improvement was found in upper-level temperature, relative humidity, and wind speed verification when using the hybrid vertical coordinate.

The hybrid vertical coordinate will be implemented in the operational versions of RAPv4 and HRRRv3 in 2018.

This work was a collaborative effort between NOAA GSD, DTC, and NCAR MMM.