Visitors: Are mixed physics helpful in a convection-allowing ensemble?

As a 2017 DTC visitor, William Gallus is using the Community Leveraged Unified Ensemble (CLUE) output from the 2016 NOAA Hazardous Weather Testbed Spring Experiment to study the impact of mixed physics in a convection-allowing ensemble.  Two of the 2016 CLUE ensembles were similar in their use of mixed initial and lateral boundary conditions (at the side edges of the model domain), but one of them also added mixed physics, using four different microphysics schemes and three different planetary boundary layer schemes.

Traditionally, ensembles have used mixed initial and lateral boundary conditions. Their perturbations generally resulted in members equally likely to verify; a good quality in ensembles.  However, as horizontal grid spacing was refined and the focus of forecasts shifted to convective precipitation, studies suggested that problems with insufficient spread might be alleviated through the use of mixed physics.  Although spread often did increase, rules of well-designed ensemble approaches were violated such as biases related to the particular physics schemes, and in some cases members that were more likely to verify than others. Improved approaches for generating mixed initial and lateral boundary conditions for use in high-resolution models now prompt the question – is there any advantage to using mixed physics in the design of an ensemble? 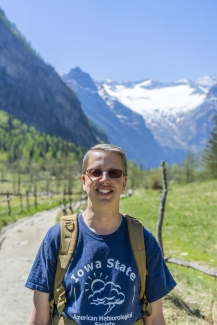 To explore the impact of mixed physics, the Meteorological Evaluation Tools (MET) has been run for 18 members of the two ensembles for 20 cases that occurred in May and early June 2016.  Standard point-to-point verification metrics such as Gilbert Skill Score (GSS) and Bias are being evaluated for hourly and 3-hourly precipitation and hourly reflectivity.  In addition, Method for Object-Based Diagnostic Evaluation (MODE) attributes are being compared among the nine members of each ensemble.

Preliminary results suggest that more spread is present in the ensemble that used mixed physics, and that the median values of convective system precipitation and reflectivity are closer to the observed values.  However, the median values are achieved by having a few members with unreasonably large high biases that are balanced by a larger set of members suffering from systematic low biases.  Is such an ensemble the best guidance for forecasters?

Accumulated measures of error from each member would suggest that the ensemble using mixed physics performs more poorly.  The figure shows an example of the 90th percentile value of reflectivity among the systems identified by MODE as a function of forecast hour for the nine members examined in both ensembles.  Additional work is needed along with communication with forecasters to determine which type of ensemble has the most value for those who interpret the guidance.

MET output and how the ensembles depicted convective initiation are also being examined, along with an enhanced focus on systematic biases present in different microphysical schemes.  It is hoped that the results of this project will influence the design of the 2018 CLUE ensemble and that future operational ensembles used to predict thunderstorms and severe weather can be tailored in the best way possible.  This visit has been an especially nice one for Dr. Gallus since he had done several DTC visits about ten years ago when the program was new, so the experience feels a little like “coming home”!  The DTC staff are always incredibly helpful, and the visits are a great way to become familiar with many useful new research tools. Universities can become a bit like ghost towns in the summer, so he also enjoys the chance to get away to Boulder, with its more comfortable climate, great opportunities to be outdoors, numerous healthy places to eat, and opportunities to interact with the many scientists at NCAR.

Dr. Gallus is a meteorology professor at Iowa State University whose research has often focused on improved understanding and forecasting of convective systems. The CLUE output was provided by Dr. Adam Clark from NSSL, while observed rainfall, reflectivity, and storm rotation data were gathered by Jamie Wolff at the DTC, who is serving as his host, and Dr. Patrick Skinner from NSSL who is also working with CLUE output as a DTC visitor this year.   Dr. Gallus is also working closely with John Halley-Gotway at the DTC who has provided extensive assistance with model verification via the MET and METViewer tools. 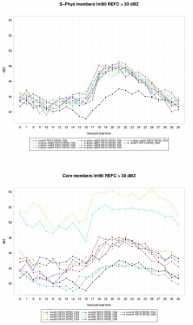 The 90th percentile reflectivity values from forecast hour 6 through 30 for the nine members studied in the single physics ensemble (top) and the ensemble that includes mixed physics (bottom). Both ensembles use mixed initial and lateral boundary conditions. The red curve is the control member (common to both ensembles) and the black curve identifies the observed values.