Post-processing is an essential but often overlooked component of numerical weather prediction and encompasses a broad range of concepts, methods, and tools to make raw model output more useful. The Unified Post Processor (UPP) can compute a variety of diagnostic fields, interpolate to pressure levels or specified (pre-defined or custom) grids, and de-stagger grids. Examples of the products include:

The UPP produces GRIB1 and GRIB2 output files that can be used directly by a number of plotting packages and the Model Evaluation Tools (MET) verification package. 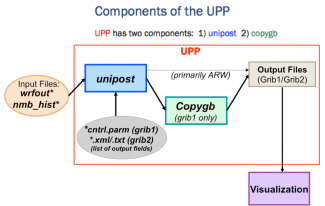 The UPP is used to post-process operational models such as the Global Forecast System (GFS), GFS Ensemble Forecast System (GEFS), North American Mesoscale (NAM), Rapid Refresh (RAP), High Resolution Rapid Refresh (HRRR), Short Range Ensemble Forecast (SREF), and Hurricane WRF (HWRF) applications.  The DTC serves as a bridge between operations and the community, and provides UPP software and support for the Weather Research and Forecasting (WRF) modeling core.  Since the UPP is used in operations; users can mimic the production of operational products through the community UPP distribution. Another advantage is its efficient handling of large datasets because it’s a parallelized code.

One of the more popular features among community users is the ability leverage the Community Radiative Transfer Model (CRTM) to output synthetic satellite products.  Other favored features include vertical interpolations of certain products, such as radar reflectivity ¼ km above ground level (AGL), and the horizontal grid manipulation capability. In addition, users have recently leveraged UPP as a tool to post-process WRF simulations into GRIB output. Required fields can then be used as input to initialize another WRF simulation.

The DTC’s UPP team works directly with community developers to incorporate their contributions into the code base, and serves as a liaison to integrate new features into the operational code.  The UPP team also continues to expand and improve documentation to help the community use and contribute to the UPP software package.  Look for a new online tutorial coming later this year!

UPP v3.1 is the most recent version available, and was released in the Fall 2016.  The next release can be expected in Summer or Fall of 2017.  More information can be found on the UPP website: http://www.dtcenter.org/upp/users/.