Who's Who: Man Zhang

As a visiting scientist at the University of Maryland in 2005, Man Zhang learned of Colorado’s reputation of being a great place to live. When her husband had an opportunity to come to Colorado as a visiting Ph.D. student, they didn’t think twice about moving. They love Colorado and have been in the Boulder area for almost 10 years.

Man was a post-doc at CIRA in the ensemble data assimilation group. She applied the hybrid variational-ensemble data assimilation system (HVEDAS) developed at CIRA to the NOAA operational Hurricane Weather Research and Forecasting (HWRF) modeling system to directly assimilate satellite observations in the tropical cyclone inner core. She also demonstrated the potential impacts of cloud-affected satellite radiances on the tropical cyclone inner-core region analyses and forecasts. “What I like most is learning new things,” Man says, “models are always evolving.”

Man joined NOAA/GSD/CIRES in July 2013 to support Nonhydrostatic Icosahedral Model (NIM) development. Since March 2016, Man has worked with the Global Model Test Bed (GMTB) to create software reference documentation on the Global Forecast System (GFS) physics suite (using Doxygen) to provide technical information to scientists and developers. She also works closely with physics developers at GMTB to modify the parameters that they want to experiment with in GFS-NOAA Earth Modeling System (NEMS). Recently, she has been running GFS-NEMS with the Grell-Freitas cumulus scheme. “It is interesting to think about the science behind tunable parameters,” she says.

Man is thankful her brother and his family, and her parents live close - all relocating to Colorado from the Hubei Province in Central China. Her 8 year old daughter and 3 year old son keep her busy with piano, dancing, and indoor climbing classes. They like road trips as a family and have explored most of national parks in the West and some in the East, with Utah’s Arches National Park and the Great Smoky Mountains National Park being their favorites. Over the holidays they enjoyed time up in Steamboat to ski and relax in the hot springs. 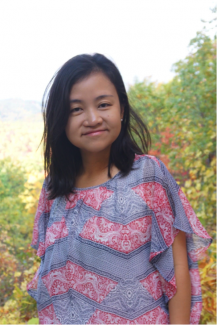