In August 2014, numerical weather prediction modelers attended a workshop to discuss dynamic core requirements and attri- butes for the NGGPS, and developed a battery of tests to be conducted in three phases over 18 months. Six existing dynamical cores were identified as potential candidates for NGGPS.

During Phase 1, a team of evaluators ran benchmarks to look at performance, both meteorological and computational, and the stability of the core. The performance benchmark measured the speed of each candidate model at the resolution run currently in National Centers for Environmental Prediction (NCEP) operations, and at a much higher resolution expected to be run operation- ally within 10 years. They also evaluated the ability of the models to scale across many tens of thousands of processor cores. 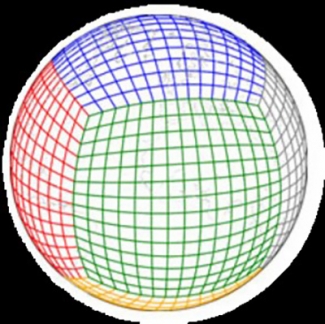 Assessment of the test outcomes from Phase 1 resulted in the recommendation to reduce the candidate pool to two cores, NCAR’s Model for Prediction Across Scales (MPAS) and GFDL’s Finite-Volume on a Cubed Sphere (FV3), prior to Phase 2.

The results of Phase 2 tests showed that GFDL’s FV3 satisfied all the criteria, had a high level of readiness for operational imple- mentation, and was computationally highly efficient. As a result, the panel of experts recommended to NOAA leadership that FV3 become the atmospheric dynamical core of the NGGPS. NOAA announced the selection of FV3 on July 27, 2016.

Phase 3 of the project, getting underway now, will involve integrating the FV3 dynamical core with the rest of the operational global forecast system, including the data assimilation and post-processing systems. See results, https://www.weather.gov/sti/sti- modeling_nggps_implementation_atmdynamics.

Hindcast of the 2008 hurricane season, simulated by the FV3-powered GFDL model at 13 km resolution.