Who's Who: Chunhua Zhou

Circumstances can make it hard to connect with people, and with snowstorms and parent-teacher conferences, catching up with Chunhua Zhou took a few tries. But meeting her and learning about her work in the DTC made the effort worthwhile.

Chunhua and her younger brother grew up in central China. While he still lives there and runs a small business, Chunhua went to the University of Hawaii in 2003, receiving her Ph.D. in Meteorology in 2009. Her thesis studies involved the dynamics of the tropical intraseasonal oscillation and its interaction with the synoptic variability. Before joining the DTC, she worked as a postdoc producing daily numerical weather predictions for Hawaii using the WRF model.

Chunhua has kept quite busy since moving the DTC, working in the Data Assimilation team under Hui Shao on GSI testing and evaluation (TNE) and also community supports. Besides GSI, she has also worked on other data assimilation systems such as WRFDA. As GSI evolved from 3DVAR, to 3D ensemble-variational GSI hybrid, to the 4D ensemble-variational hybrid method, Chunhua’s efforts also shifted from GSI 3DVAR for regional application, to 3D GSI hybrid for hurricane forecasts, to the testing and evaluation of the current new capability of 4D GSI hybrid. She is also working with Josh Hacker on cloudy radiance data assimilation studies.

Chunhua enjoys living in Colorado with her husband Shenghong – a civil engineer working in Denver – and her 9-year-old daughter Sonya and 5-year-old son Jason. Asked about possibly returning to China some day, Chunhua says only for visits, as she would like to stay where she is and keep doing the work she’s doing for some time to come. So you might see her out hiking the trails in the area with her family, if there are no snowstorms or school activities, at least. 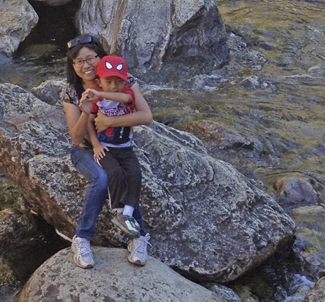