Visitors: Implementation and Validation of a Geo-Statistical Observation Operator for the Assimilation of Near Surface Winds in GSI

As a 2015 DTC visitor, Joël Bédard is working with Josh Hacker to apply a geo-statistical observation operator for the assimilation of near-surface winds in GSI for the NCEP Rapid Refresh (RAP) regional forecasting system.

Biases and representativeness errors limit the global influence of near-surface wind observations. Although many near-surface wind observations over land are available from the global observing system, they had not been used in data assimilation systems until recently and many are still unused. Winds from small islands, sub-grid scale headlands and tropical lands are still excluded from the UK Met Office data assimilation system, while other operational systems simply blacklist wind observations from land stations (e.g. Environment Canada). Similarly, the RAP systems uses strict quality control checks to prevent degrading the near-surface wind analysis due to representativeness errors.

Model Output Statistics (MOS) methods are often used for forecast post-processing, and Bédard et al. previously evaluated MOS for use in the data assimilation. Doing so increases the consistency between observations, analyses and forecasts. They also addressed representativeness and systematic error issues by developing a geo-statistical observation operator based on a multiple grid-point approach called GMOS (Geophysical Model Output Statistics). The idea behind this operator is that the nearest grid-points, or a simple interpolation of the surrounding grid-points, may not represent conditions at an observing station, especially if the station is located on complex terrain or coastal site. On the other hand, amongst the surrounding grid-points, there are generally one or several grid-points that are more representative of the observing site. Thus, GMOS uses a set of geo-statistical weights relating the closest NWP grid-points to the observation site. GMOS takes advantage of the correlation between resolved scales and unresolved scales to correct the stationary and isotropic components of the systematic and representativeness error associated with local geographical characteristics (e.g. surface roughness or coastal effects). As a result, GMOS attributes higher weights to the most representative grid-points and it better represents the meteorological phenomena onsite (see Figure). 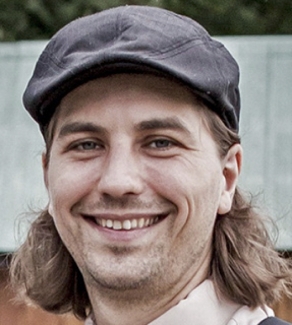 As of now, the GMOS operator was implemented in the GSI code and the operators statistical coefficients were obtained using historical data. The evaluation runs are currently ongoing. 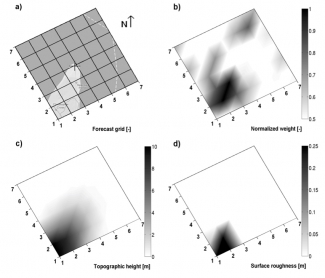