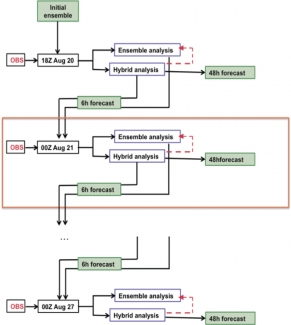 A complete hybrid EnKF-GSI for the Hurricane WRF (HWRF) system was developed for the regional ensemble experiments, and results were compared to those obtained with the 2014 HWRF system. A two-way hybrid system was set up based on the GFS data assimilation scheme, using the GSI deterministic analysis to re-center the ensemble members at each analysis time. This re-centering step was found to reduce the ensemble spread for tropical cyclone (TC) center locations and intensity, so a one-way hybrid system that skipped the re-centering step was also developed.

Results showed that the operational system (Figure below, green) generated the lowest bias at the analysis time, but over time the bias showed a rapid “spin-down” from stronger to weaker wind forecasts than observed. (A similar spin-down issue was also noted using the 2015 HWRF system, but with smaller biases.)  The one-way hybrid system (red), which used a regional ensemble, performed better than the two-way hybrid system (blue), and also outperformed the 2014 operational configuration and the GSI hybrid system using GFS ensemble (without vortex initialization, cyan), for TC intensity forecasts beyond the 12-hour forecast lead time.

The DTC also performed experiments to further investigate the initial spin-down issue and found that it is related to an imbalance issue triggered by data assimilation. Experiments show that applying dynamic constraints could help ease such an imbalance. However, more research is required to find an optimal solution that reduces such imbalance-induced noise while still achieving desirable analysis increments.

Bias of (a) Maximum surface wind speed, and (b) Minimum sea level pressure for all the forecasts as a function of forecast lead time
Contributed by Hui Shao