Who's Who: Ming Hu

Ming is one of several DTC scientists with cross-Pacific ties, with early roots in central China (near Xian) and school and work experience in Jiangsu (where his parents live), the Nanjing Institute of Meteorology, Beijing, and the University of Oklahoma, where he earned his PhD in 2005. Since 2007 he has been working at ESRL/GSD in Boulder. One of the go-to people for data assimilation work at the DTC and at GSD with the RAP/HRRR, he is called upon not only for development work on data assimilation products and applications, but also for community GSI support and for help at tutorials and workshops. These teaching experiences are in fact high on his list of favorite activities. Although he enjoys a good relationship with developers at EMC, he admits to feeling a bit daunted when he compares the scope of the effort at GSD with the 30 or so scientists working on GSI at EMC. He and his family are clearly settled here in Boulder (his wife also works at GSD), but he does seem a bit nostalgic when he talks about the Yellow Mountains, maybe his favorite spot in China. 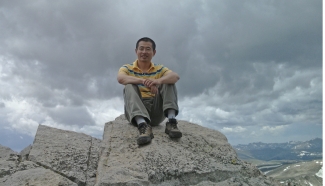