The transition of research advances into operations (abbreviated as R2O), particularly those operations involving numerical weather prediction, satellite meteorology, and severe weather forecasting, has always been a major challenge for the atmospheric science community.

With a preeminent mission to facilitate R2O in mind, NOAA and NCAR established the DTC in 2003. Since then, the DTC has worked toward this goal in three specific ways:  by providing community support for operational NWP systems, by performing testing and evaluation of promising NWP innovations, and by promoting interactions between the research and operational NWP communities via workshops, a newsletter, and a robust visitor program. Early DTC activities, which were primarily focused on evaluation of opportunities afforded by the then-new Weather Research and Forecasting model (WRF), included the testing and evaluation of two WRF model dynamic cores (one developed at NCAR and the other at EMC), rapid refresh applications; and a real-time high resolution winter forecast experiment. As a neutral party not involved with the development of either core, the DTC played a vital, independent role in these tests, especially their planning, their evaluation, and the provision of statistical results to all parties. 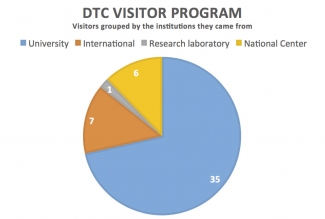 In its other role, that of community support, the DTC began providing users of the operational NMME model with documentation, tutorials, and help desk access in 2005. Since then, this DTC activity has grown in extent and complexity, and today also includes community support for the HWRF end-to-end tropical cyclone prediction system, the Unified Post Processer (UPP), Gridpoint Statistical Interpolation (GSI) and GSI ensemble hybrid data assimilation systems, and the Model Evaluation Tools (MET) verification system. In April 2015, the DTC will host its first Nonhydrostatic Multiscale Model on the B-grid (NMMB) tutorial at College Park, MD. Since its inception, the DTC has in fact organized or co-sponsored 27 community workshops, and has hosted 49 visitor projects selected on the basis of their potential to facilitate interaction between the operational and research NWP communities. The accompanying figures illustrate the distribution and evolution of DTC visitors and users of DTC-supported systems.

“The DTC has organized or co-sponsored 27 community workshops and has hosted 49 visitor projects.”

These activities have so far been primarily focused on regional and national weather modeling. Now, with continued advances in computing technology, global operational NWP using nonhydrostatic models at cloud-permitting resolution is within reach. With this possibility in mind, all major international operational centers are actively developing advanced global models. The United States National Weather Service, for example, initiated a major R2O project in 2014 to develop a Next-Generation Global Prediction System (NGGPS) that would reach mesoscale resolution. The boundary between regional and global modeling at these scales becomes murky indeed, and previous work of the DTC (testing of model physics in regional models, for example) becomes very relevant to global models as well. Recognizing this opportunity, the DTC Executive Committee unanimously voted earlier this year to expand the DTC’s scope to include global modeling. This decision marks a change that will have a profound impact on the direction of the DTC for the next ten years. Here, I offer my perspective on what, in this new context, the DTC should be focusing on in the future. 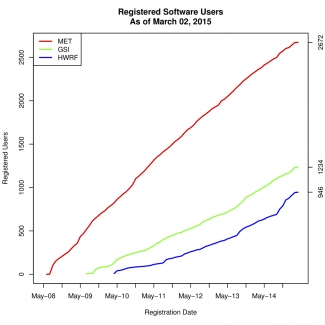 Storm-scale NWP. While significant progress has been made in NWP over the past decade, society’s expectations have often exceeded improvements. An excellent example is the recent January blizzard forecast for New York City, for which the inability to adequately convey forecast uncertainties in numerical guidance was widely recognized. In a previous but related report, the UCAR Community Advisory Committee for NCEP (or UCACN) pointed out that NCEP does not have an operational ensemble prediction system at convection-permitting (that is, storm-scale) resolution. The development and operation of a prediction system of this kind is a major undertaking, with significant computing demands and challenging scientific and technical issues. Among them are questions concerning initial condition perturbations, model perturbations, calibration, post-processing, and verification, just to name a few. These are also areas of active research attracting the interest of a significant fraction of the 24,000 registered WRF users. Since convection-resolving ensemble prediction is in fact a theme that cross-cuts all its current task areas, the DTC should be well positioned to facilitate R2O toward this end that is useful to both operations and research.

Unified modeling. From an R2O perspective, it is highly beneficial to reduce the number of operational systems, thereby allowing the research community to focus on a smaller number of systems.  Unified modeling (UM), which seeks to limit the proliferation of competing modeling elements, has been recognized worldwide as the most cost-effective approach to deal with the increased number and complexity of numerical weather, climate and environmental prediction systems at all space and time scales. A UM framework also allows sharing of modeling efforts (e.g., improvements in physical parameterizations) across different modeling systems. The UCACN has urged NCEP to migrate toward a UM approach for its future model development, and has suggested an interim goal of reducing NCEP modeling systems to only two: A global weather and climate system (GFS/CFS) and a very-high resolution convection resolving system. With nesting capability, the global high-resolution nonhydrostatic model planned for the NGGPS project could be a suitable candidate for a UM framework at NCEP.  It is true that migration toward UM is a significant challenge for any operational center, involving as it does a major culture change in addition to numerous technical issues. In its capacity for testing and evaluation, the DTC can help facilitate such a transition at NCEP.

“When fully developed, the global system will be an earth modeling system with fully coupled atmosphere, ocean, ice, land, waves, and aerosol components.”

Earth system modeling. When fully developed, the NGGPS will be an earth modeling system with fully coupled atmosphere, ocean, ice, land, waves, and aerosol components. The interactions between these components will require compatibility within the NOAA Environmental Modeling System (NEMS) and the Earth System Modeling Framework (ESMF). The NGGPS is expected to provide improved forecasts at a wide range of time scales, from a few hours to 30 days. For this major undertaking to be successful, the community at large will have to contribute at every step of its development. The DTC can encourage and facilitate these contributions to NGGPS code development by managing that code in a way that allows effective access by external developers, and by performing independent testing and evaluation of system upgrades proposed by the external community.

NWP IT Environment. For each NWP system it supports, the DTC typically maintains a community repository separate from the repository maintained at operational centers. Maintaining a separate community repository is a mixed blessing. On the one hand, a separate repository shields operations from potentially problematic code changes that have not been fully tested. On the other hand, ensuring proper synchronization between the two repositories (a necessary step if the research community is to take advantage of the latest developments at operational centers) becomes a greater challenge. Taking advantage of experience at other operational centers (e.g., ECMWF and UKMO), the DTC in collaboration with EMC has started exploring the possibility of developing an NWP IT Environment (NITE) concept for community support for operational systems. The basic idea of NITE is to maintain an IT infrastructure at the operational center itself (i.e., at EMC) that supports the development, testing, and evaluation of operational models by scientists both within and outside the center. Given the complexity of the NGGPS system, maintaining duplicate systems (repositories) for its many modeling components is neither feasible nor cost effective. This leaves a NITE infrastructure as perhaps the only viable option. The DTC should continue to work with EMC to support NITE development, with the potential of a profound impact on how R2O in NWP is conducted for the coming decade.