The most deadly and destructive hurricane during the 2012 Atlantic hurricane season, Hurricane Sandy was a late-season storm that developed from a tropical wave in the western Caribbean. It quickly intensified into a tropical storm and made its first landfall as a Category 1 storm over Jamaica. As the storm progressed northward, it continued to strengthen into a Category 3 storm, prior to making landfall on eastern Cuba and subsequently weakening back to a Category 1 hurricane. Sandy continued weakening to tropical-storm strength as it moved up through the Bahamas, and then began re-intensifying as it pushed northeastward parallel to the United States coastline. Ultimately, Sandy curved west-northwest, maintaining its strength as it transitioned to an extratropical cyclone just prior to coming onshore in New Jersey with hurricane force winds.

In total, more than 230 fatalities were directly or indirectly associated with Hurricane Sandy. Sandy impacted the the Caribbean, Bahamas, Bermuda, the southeastern US, Mid-Atlantic and New England states, up through eastern Canada. Sandy was blamed for $65 billion in damage in the U.S. alone, making it the fourth-costliest hurricane in U.S. history as of August 2019. 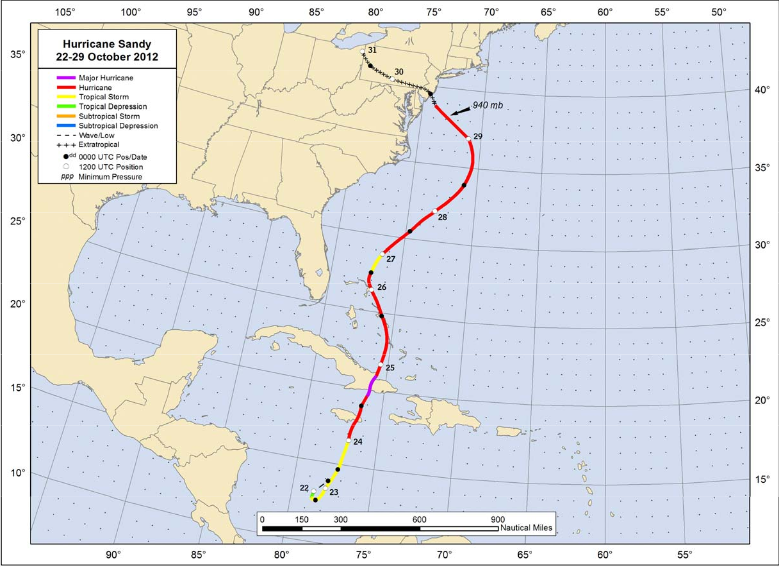