The need for a Common Community Physics Package

Physical parameterization codes are often implemented so that they are strongly linked to a particular model dynamical core, with dependencies on grid structure, prognostic variables, and even time-stepping scheme. Dependencies amongst schemes are also common. For example, information from a deep convection scheme may be needed in a gravity wave drag scheme. While the dependencies are generally justified based on computational efficiency arguments, it complicates the replacement of parameterizations and of suites, marginalizing tremendous scientific talent.

To address these difficulties, and engage the broad community of physics developers in the Weather Service’s Next-Generation Global Prediction System (NGGPS), the DTC’s Global Model Test Bed (GMTB) is participating in developing the Common Community Physics Package (CCPP). The schematic (below) shows the DTC’s proposed modeling meta-structure for NGGPS, with the CCPP shown in the gray box. Specific parameterizations in the CCPP shown here are for example only; other parameterization or set of parameterizations could be displayed in the blue boxes.

Although requirements are sure to evolve depending on priorities and funding, an initial set is in place to inform the CCPP design. They reflect the following vision for the CCPP: (1) a low barrier to entry for physics researchers to test their ideas in a sandbox, (2) a hierarchy of testing capabilities, ranging from unit tests to global model tests, (3) a set of peer-reviewed metrics for validation and verification, and (4) a community process by which new or modified parameterizations become supported within the CCPP. We recognize that an easier technical implementation path for a physical parameterization does not replace the scientific expertise necessary to ensure that it functions correctly or works well as part of a suite. A test environment intended to ease that process is also under development at GMTB, beginning with a single-column model linked to the GFS physics.

The low barrier to entry implies a highly modular code and clear dependencies. Dependencies, and the interface between physics and a dynamical core, will be handled by a thin “driver” layer (dark green box in the schematic). Variables are defined in the driver, and exchanged between model dynamics and various parameterizations. The current driver, being used for the NGGPS dynamic core test participants to run their models with the GFS physics suite, is a descendant of the National Unified Operational Prediction Capability (NUOPC) physics driver. Going forward it will be called the Interoperable Physics Driver. Continuing NUOPC input is critical to success, and the Driver development is proceeding with the NUOPC physics group’s knowledge and input.

The DTC is uniquely qualified to fulfill a leading role in physics development and community support, and the emerging CCPP is a critical element to bridge research and operations. The result will be a capability for operational centers to more rapidly adopt codes that reflect evolving scientific knowledge, and an operationally relevant environment for the broad community of physics developers to test ideas. 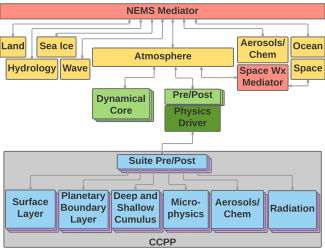 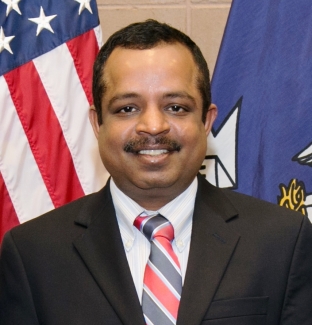 My association with the Developmental Testbed Center (DTC) dates back to early 2008 when the NCEP operational Hurricane Weather Research and Forecast (HWRF) modeling system developed at Environmental Modeling Center (EMC) was adopted to create a community modeling framework for hurricane model development supported by the Hurricane Forecast Improvement Project (HFIP). I enjoyed working with DTC in various capacities as the Hurricane Team Leader at EMC and the Development Manager of HFIP.

Operational hurricane model development undoubtedly has been one of the most successful initiatives by HFIP project that enabled a process for effective transition of research to operations (R2O), and the outcome is clearly evident in terms of tangible improvements in hurricane track and intensity forecast guidance from operational HWRF as demonstrated in real-time in the past few years. HWRF model has evolved as a unique high-resolution atmosphere-ocean-wave coupled system for all global tropical cyclones, serving various operational forecast agencies, researchers and private industry. HWRF is the only operational hurricane model in the world freely distributed and supported to the research community through extensive documentation, in-person and online tutorials, and user guides.

While HWRF’s development is centralized at EMC, it incorporates contributions from a variety of scientists spread out over several governmental laboratories and academic institutions. This distributed development scenario poses significant challenges: a large number of scientists need to learn how to use the model, operational and research codes need to stay synchronized to avoid divergence, and promising new capabilities need to be tested for operational consideration. DTC’s contributions for HWRF are pivotal in the areas of code management, advanced support for model developers and general users, and extensive testing and evaluation of new innovations.

My recent transition as Chief of the Global Climate and Weather Modeling Branch (GCWMB) at EMC coincided with two other major initiatives – the National Weather Service (NWS) Next Generation Global Prediction System (NGGPS) project, and the expansion of DTC’s role into global modeling through creation of the Global Modeling Test Bed (GMTB). Operational global modeling at NOAA/NCEP is the most significant attribute for the entire US weather enterprise. The NCEP Global Forecast System (GFS) stands as a back bone for the whole operational production suite. GCWMB at NCEP/EMC is responsible for developing, implementing and advancing the global modeling system that spans from weather to climate scales. With support from the NGGPS project, a new non-hydrostatic dynamic core is being selected for replacing the current spectral model for serving the future needs of the NWS. A community based NOAA Environmental Modeling System (NEMS) architecture will enable seamless development and integration of atmosphere, ocean, land, sea-ice, waves, and aerosols for weather, sub-seasonal and seasonal forecast capabilities. Similar to the HFIP project, the emphasis of NGGPS is to foster enhanced R2O capabilities for accelerated model development and transition to operations. GMTB has embarked on designing a Common Community Physics Package (CCPP) within NEMS that allows for systematic evaluation of advanced physics.

There is enormous talent in the US NWP community that has largely been untapped. With a focused approach, we can bring together the best in the field by adopting the community modeling concept. I am looking forward to continue working with DTC to strengthen the relationship between operational and research communities, and to realize the goals of NGGPS in becoming second to none in global weather prediction.

Hongli has been a CIRA Research Scientist for 21 years. After working in the ESRL/Chemical Sciences Division with aerosol and cloud modeling, she wanted to change her focus to she has work with the real-time cloud-scale modeling on 0-3 hour time scales. Now she is working with longer time scales - out to 48 hours. Her role in the DTC is in the Global Modeling Testbed working with the NGGPS to test several suites of physics. Lately they have been test cases for 3 months in the winter and 3 months in the summer to use as a benchmark.

Away from the office, Hongli loves to be outdoors, and volunteers in Longmont’s “Clean-Up Green Up” campaign to make area parks, trails and open spaces more beautiful. She also likes to travel and experience the contrasts of different regions such as the Pacific Northwest rainforests compared with New York City - both are full of life, just different kinds. Indoors, she enjoys classical music and live productions--witnessing the Berlin Philharmonic in person was a dream-come-true. 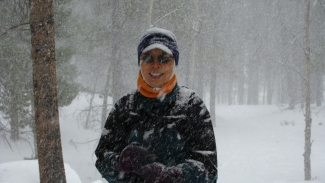 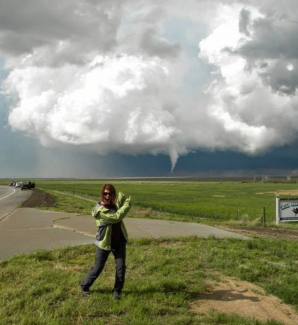 Harnessing the Power of Evolution for Weather Prediction

As a DTC Visitor in 2015, Paul Roebber explored an idea for generating ensemble weather predictions known as evolutionary programming (EP). The method relies on a gradually and increasingly restrictive cost function to produce and to evaluate succeeding generations of a population of algorithms until such time as a best ensemble solution is determined based on cross-validation. The approach was developed by Roebber to produce baseline prediction equations equivalent to linear or nonlinear multiple regression equations (a kind of model output statistics or MOS) modified by if-then conditionals and using observations as well as numerical weather prediction (NWP) model output.

The prime objective of his DTC Visitor project was to explore possible improvements to the method. A first step, using the Yellowstone supercomputer, was to consider the relative contribution of large ensemble populations, numbering from 3,000 to as many as 500,000 possible members, to ensemble diversity. As illustrated in the figure below for 60 hour forecasts of minimum temperature, smaller as well as very large EP ensembles outperform the GFS 21-member ensemble MOS forecasts in both a deterministic (RMSE) and probabilistic (Brier Skill Score; BSS) sense, but the increase in ensemble size (indicated by the size of the bubbles) provides only minor additional skill.

Specific issues explored in the context of next-day heavy convective rainfall forecasting included: the performance of the method regionally and locally, compared to multiple logistic regression (MLR) and artificial neural networks (ANN); and ensemble member selection for use in bias calibration such as Bayesian Model Combination.

As illustrated in the performance diagram in the figure below for regional forecasts of rainfall in excess of 1.5 inches, the MLR and EP demonstrate comparable skill, and both superior to that of a trained ANN. The slightly different performance characteristics (higher hits and false alarms versus lower hits and false alarms) of the three methods suggests the possibility of combining the information in useful ways operationally. Insights gained from this work are leading to several collaborations with NOAA scientists related to adaptive systems and deep learning networks.